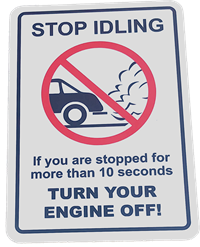 Cllr Tessa de Galleani has been busy working with the Plymouth Marine Laboratory through AccessLab to tackle the problem of air pollution caused by idling coaches.

At the AccessLab event, Cllr de Galleani was paired with Dr Lee de Mora, a marine ecosystem modeller from Plymouth Marine Laboratory. Over the course of the workshop, they did some collaborative research and found several resources about idling diesel engines, news articles from various towns in the UK that have implemented idling fines, and some scientific papers about the links between air pollution and deaths in the UK. In addition, Lee produced an estimate of the total carbon dioxide (CO2) emitted by the coaches while idling (approximately 4kg of CO2 per hour per vehicle).

Armed with this information, Cllr de Galleani convinced the County, District and Dartmouth councillors to ban idling in Dartmouth. Permissions and funding were put in place and four signs were erected along Dartmouth Embankment asking drivers to stop their engines idling. In addition, the Dartmouth police sergeant agreed to help and is now asking coach drivers to turn off their engines.